THE WORST JOURNEY IN THE WORLD - Apsley Cherry-Garrard, Constable, London, 1922. Two volumes in grey cloth with gilt titles, First edition. Some foxing but overall VG in tight bindings, The first edition contains ten folding panoramic plates that are not included in later editions. Numerous Edward Wilson paintings as colour plates. This classic of Antarctic literature is an account of Scott's last Antarctic Expedition from 1910-13. Hearing of Scott's proposed 2nd expedition, Cherry-Garrard volunteered his services to Dr. Wilson, whom he had met previously. "In an expedition every member of which was a specialist, he was accepted by Scott on Wilson's recommendation alone & duly enlisted as 'assistant zoologist". Yet from the outset, despite his youth and inexperience, he won the affectionate regard of his more seasoned comrades, and before the close of the expedition had more sledge-journeys to his credit than any other surviving member. Cherry-Garrard was warmly commended by Scott for his efficiency and unselfishness as a sledger and tent-mate. In the comparative comfort of life at base, he edited the South Polar Times. Wilson chose Bowers and Cherry-Garrard -- 'the pick of the sledging element' (Scott) -- as his companions for a Winter Journey in 1911 to the rookery of the Emperor Penguin at Cape Crozier, an exploit which is still without parallel in the annals of polar exploration. On their return 5 weeks later, Scott described their journey as 'the hardest that has ever been made' -- a phrase which later suggested to Cherry-Garrard the title of his narrative. The book is widely regarded as the most readable of all the Antarctic literature, which is attributable to the heavy editing of the manuscript by George Bernard Shaw, who was a family friend of the Cherry-Garrards'. A very handsome set. Scarce. $NZ2400 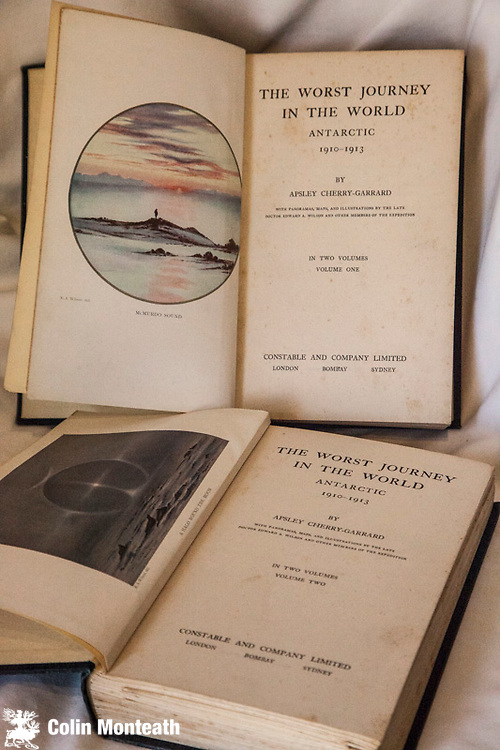